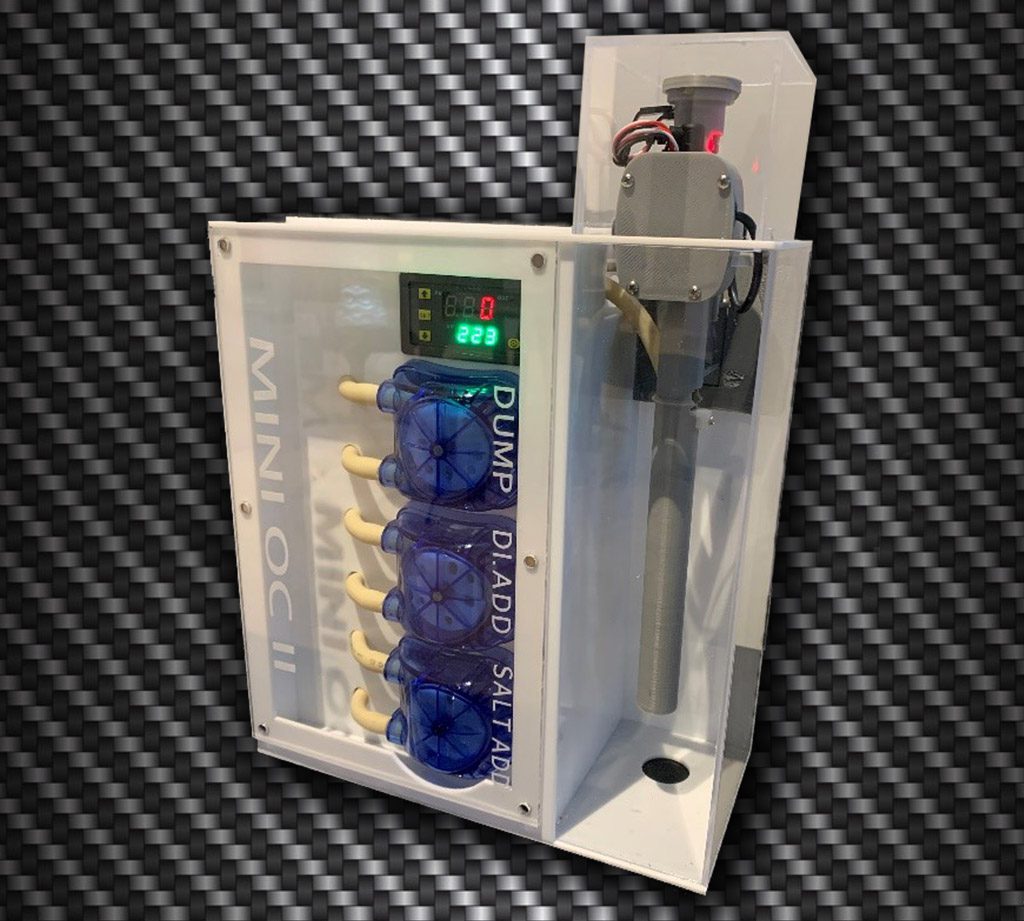 Aquarium parameter stability in reef aquariums has always been, and will always be key to your success.

Don’t chase numbers. Use these machines to stabilize your aquarium AUTOMATICALLY.

The new era of control is here. In March of 2019 SeaVisions has submitted a patent request for a measurement apparatus for measuring specific gravity of a liquid, and a saltwater aquarium salinity control, and water change system.

Even the most established control systems on the market will only tell you they can monitor salinity right on the box, and not control. If you dare to use them to control your water changes or top offs you are going to be disappointed. This product removes the electronic conductivity controller from the equation. There is nothing on the market now that can match this systems reliability and accuracy for aquarium and reef aquarium use. All past controllers have been designed using a conductivity cell with a known cell constant such as 1 or 10, and a conductivity controller to interpret the conductivity. Pertinent to all these conductivity controllers a small electrical current flows between two electrodes set a certain distance apart, usually about 1cm. If there are high concentrations in the solution the conductance is high, resulting in a fast current. The electrical current is slower and gives a smaller reading when a lower concentration is present. These electrodes are usually connected to the controller either wired mechanically or by way of a connector. They will need to be cleaned and calibrated often. And usually have less than a two-year life span.

What SeaVisions is offering is the (MINI OC) measuring 11″ long X 15″ tall and 5.5″ front to back. On the right side there is a water tank that will hold refreshed aquarium water to a specific height by way of an overflow tube. The overflow tube is not shown in the pictures above. Within this water tank the salinity measurement apparatus will be located. Within the 3d printed abs housing of the MINI OC will be a calibrated hydrometer that has a code strip formed with horizontal lines within a sub-millimeter range attached to the hydrometer. Specifically, the code strip is formed with horizontal lines at a sub-millimeter spacing, for example a vertical spacing of 140 um between the lines. The hydrometer can float within the apparatus and the code strip will move up or down based on the density of the aquarium water. There is a linear optical encoder disposed to view the code strip and configured to output electronic signals indicative of a movement of the code strip relative to the encoder and indicative of a change in the specific gravity of the liquid such as aquarium water.

The Mini OC design has the benefit of over 20 plus years in the perfecting of the DialySeas saltwater making process, and the knowledge learned in aquarium husbandry from creating better water conditions. SeaVisions promises to provide the same quality, reliability and commitment to the Mini OC as we have in all of the products produced over the past two decades.

The addition of a Mini OC to any saltwater aquarium will bring that aquarium up to todays’ standards in aquarium technology and water change automation. The addition of the Mini OC will significantly reduce the load on the existing aquarium life support system, and in most instances, reduce the necessary life support footprint requirement. The unit can and is designed to be remotely located above, below or many feet away from where the actual aquarium resides. A typical installation would be that the Mini OC is mounted on the wall next to the aquarium or below the aquarium if you have the space.

Shipping Alert Please be advised that there is a processing time of 2 to 4 weeks for the following products: Ocean Creators 1 & 2, and Vertical CADS.